Vedic future maintains a large talent pool of astrologers who are well-versed in Nadi Leaf Readings, Panchang, Kundali, Numerology, Palm Reading, Medical Astrology, Vastu, Vedic Astrology, Tarot Card Readings, KP Astrology, and more. Feel free to ask about career prospects, health, business, marital problems, match-making, love, muhurats, kundli, etc.
All astrologers on our online platform are competent and highly skilled in their sphere of work. Those who do not measure up to our stringent standards will be given additional training, and if they still don’t match up, will be delisted from our site. Clients who have established a good rapport with certain astrologers can also access them whenever required, through our platform.
As mentioned above, all chats with astrologers are confidential and will not be disclosed to anyone, unless required by law to do so.
This factor depends entirely on the user and astrologer. If users find calls expensive, then they can choose to chat with the astrologer.
Vedic Future maintains high standards, thus all users are required to maintain a certain standard of etiquette, and no vulgar or obscene chats will be entertained. It is our earnest endeavor to give users a genuine and authentic experience without compromising on quality standards. All astrologers have to undergo several rounds of interviews before they are put on the payroll of the company. Vedic Future does not in any way compromise on quality and will continue to do so in the future. 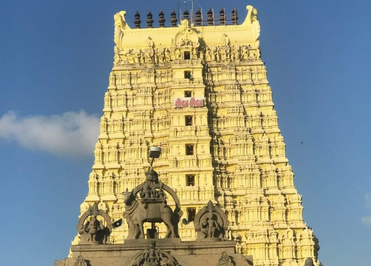 The Ramanathaaswamy Temple in Tamilnadu is one of the holiest shrines in India and the world. It is dedicated to Bhagwan Shiva, Lord of the Universe and part of the Holy Trinity of Hindu Gods, along with Bhagwan Vishnu and Bhagwan Brahma. Rameswaram temple is renowned and acknowledged as one of the sacred twelve Jyotirlingas (Radiant LIngas) of Bhagwan Shiva. It assumes even more significance as it is located in the southernmost part of the country in the island of Rameswaram in the state of Tamilnadu, India. Bhagwan Shiva resides here in the form of a Lingam, sanctifying the temple with his holy presence. The temple is considered one of the Char Dhams (four divine sites), along with Badrinath, Puri, and Dwaraka. Adi Shankara, the Guru of Advaita school of Hinduism is said to have established the Char Dhams.

The temple is considered an important holy pilgrimage site for Shaivites, Vaisnavites, and Smarthas. Bhagwan Rama built and worshipped a lingam (Ramalingam) made of sand before entering Lanka to Vanquish Ravana. Shri Hanumanji also brought a lingam from Mount Kailash (abode of Shiva) called Vishwalingam. Shri Rama proclaimed that devotees worship Vishwalingam first before going on to worship the Ramalingam. The temple is one of the 275 Paadal Petra Stalams with three of the most revered Nayanars (Saivite Saints) of yore Appar, Sundarar, and Tirugnana Sambandar singing paeans to its glory.
It is believed that pilgrims visiting the temple are absolved of all their sins and bad karma, blessing them with turning over a new leaf.

Devotees and pilgrims throng the temple throughout the year, with many coming to immerse the ashes of their loved ones in the sea of Dhanushkodi. it is highly recommended that everyone visit the temple at least once in their lifetime to get the blessings of Shri Ramanathaswamy (Shiva). Those suffering from Pitru Dosha (ancestral sins) can perform a ritual to wipe out bad karma. Thila Homam, a powerful Vedic ritual is performed for the peace of ancestral souls.

The water in the sixty-four Tirthas (holy water bodies) in and around Rameswaram is said to flow from different rivers in India. Twenty-four among these are said to be sacred, and devotees from all around the world come here to have a bath in these Tirthas to cleanse their sins. Special Theerthams and Poojas are offered to the chief archetype, Bhagwan Shiva. It is widely believed that the holy water in the temple can purify sins and cure any illness. The Surya theerthams, Ganga theertham, Shiva theertham, Sarva theertham, and Mahalakshmi theerrtham are some of the sacred theerthams where one can have a bath.

The Temple is an architectural marvel and truly a spectacular sight to behold. Its imposing facade has mesmerized many a devotee and even more so when you enter the portals of the temple. One can not but be impressed with its stunning architecture and meticulous attention to detail. King Muthuramlinga Sethupathy, is credited with building the magnificent 1000-pillar corridor which is the longest among Hindu temples in India. There is a huge compound wall surrounding the temple, with Gopurams (towers) in the east and west and gate towers in the north and south. One can not but be impressed with the striking colonnades in the interiors of the temple, with each leading up to a single point.

The easiest way of getting to the temple is by train from Chennai. As you near the island, the tracks are literally submerged in water, and when you look out, the train appears to be floating in the sea. It is a wonderful experience to feel the train rocking to and fro. As you near the train station in Rameswaram you can feel the divinity prevalent in the air. The station is not very large, but ample to handle the inflow of devotees.

The town itself carries a typical South Indian air and though not very large, has several hotels and resorts for accommodation. The TTDC resort operated by the Tamilnadu government is a great place to book your stay in. The rooms are spacious and clean and not very expensive. Of course, you need to make advance bookings, which can be done from Chennai.

As you make your way out to the town, there are several eateries serving typical south Indian dishes. Must-have breakfast items include the soft idlis, and dosas, which are delicious and easy to digest. Other notable items include vada, pongal, upma, and khichdi, which are equally delicious. A typical lunch and dinner consists of South Indian meals which are served on banana leaves, and include several delectable side dishes. Prices are reasonable and not a strain on the pocket.

As you go around the island, there are several places of interest that you can visit. Many places display floating rocks, which were used by Shri Rama and Hanumanji to build the floating bridge to Lanka, portions of which can still be seen in satellite images. You can wrap your hands around the rocks immersed in water tanks and feel the weight.

The beach is thronged by devotees and priests performing Poojas to departed souls, before immersing the ashes in the sea. You can also have a dip in the sea after completing the rituals. Only a thin sliver of 14 km of water separates Rameswaram island and Lanka. At Dhanushkodi, the southernmost point of the island, you can see the lights of the buildings in Sri Lanka after sundown.

Getting a Dharshan of the Lingam in the sanctum sanctorum is an enlightening feeling that one should definitely experience. It radiates an ethereal feeling that cannot be described in words and can only be felt when you visit the fabulous Ramanathaswam temple in Rameshwaram.